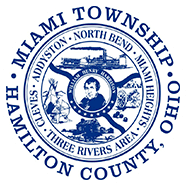 Miami Township was founded in 1791. Its name is derived from the Great Miami River, which is one of it's boundaries. The Township is comprised of 21 square miles in the southwestern tip of the state of Ohio.

In 1791, the Court of General Sessions set up three Townships in Hamilton County, one of which was Miami. At that time it was much larger, including parts of present day Green, Delhi and Colerain Townships. The present boundaries have been pretty much fixed since 1804.

Miami Township is an interesting combination of hills and valleys bordered on two sides by the Ohio and Great Miami Rivers. The Tills that adorn the hilltops were for the most part left by the Illinoisian Glacier which visited us about 350,000 thousand years ago. This was the one that so drastically changed the drainage patterns of the Ohio and Miami Rivers. Later, about 100,000 years ago the Wisconsin Glacier headed south, stopping just short of Miami Township, but providing us with great deposits of gravel, now found in the river valleys. The gravels were sorted and layered by the outwash as the ice sheets retreated.

We do not know where the first human inhabitants of Miami Township lived, but it could have been near the "Point," the juncture of the Great Miami and Ohio Rivers. On the bluff in Shawnee Lookout Park there is an ancient fortification with a calculated construction date of about 270 A.D. A nearby village site was excavated by scientists from the University of Cincinnati some years ago. General William Henry Harrison examined the fort at one time.